Getting harder and harder to cache


It seems to be getting harder and harder to cache. Oh, not because I can't get out or am busy. You see I have been up in the Yukon since the end of May, and the town I am in only has two caches in town....eeek. The next nearest is about 5 mins away, then 2 about 10 mins away, and then another 2 in opposite directions about 25 minutes away. There was also one about 40 mins away, but I got that one on the way to Watson Lake as it was a FTF. So 7 caches to get within a 20km radius, what do I do on the second day!!!  LOL
Actually, I have been pacing myself, and not going for all them right away, in fact the 2 in town are both in the Sign Post Forest  and about 170 meters apart. 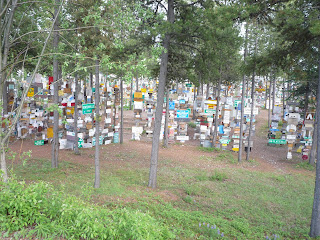 But I only did them on different days, so I would have a reason to get out and about. So after the first week, I was out of local caches.
If you read my last blog post, you would see that I have travelled some farther distances to get some BC caches for a challenge cache, as well as a cache for International Geocachers day(It was the 4th cache ever published in the Yukon, but the first one ever found) While up here I have also found BC's most northern cache, The Yukon's 4th and 5th ever caches(I plan to get Yukon's 1st cache on my next trip to Whitehorse)
Just so you know all of the Yukon has a grand total of 248 caches. In BC there is almost 28,000 active caches. A wee bit of a difference.

Today a bunch of us decided to take a trip to Liard River Hot springs
We saw a herd of about 40-50 Buffalo along the highway. It was quite exciting as we were able to 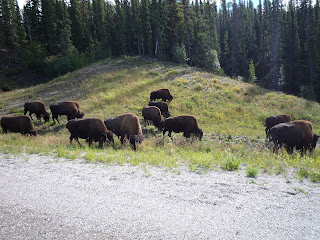 stop right beside them and take a lot of photos.  There were some huge ones as well as some baby's and they just walked by the truck, and did not care that we were there.  Further up the road we stopped so I could grab a cache. It was the Yukon's most southerly cache. It was only 72km from Watson Lake but I can't use it for the VLH challenge cache(see last blog) as it is in the Yukon, not BC.

﻿
We then stopped at a very beautful spot overlooking the river. The river was flowing quite fast, and there was lots of debri from when the floods and road closures happened a few months back. While there we saw what appeared to be a couple of duffle bags and a knapsack floating down the river. We saw no sign of people or a canoe, so we assumed they made it to shore. 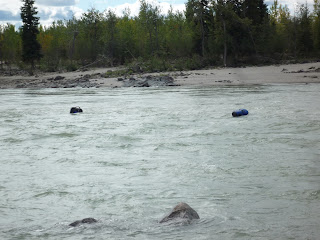 We then continued down the road to our destination.
The Liard River Hot Springs....what a awesome day it was to hang out and soak in the springs. It was almost too hot and you could only stay in so long. 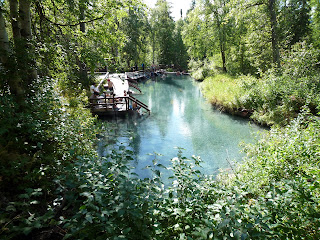 On our way home we passed the same herd of buffalo plus a smaller herd and a few single buffalo walking along the highway. We also saw a bear, there is no shortage of them up here. 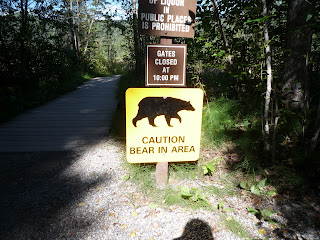 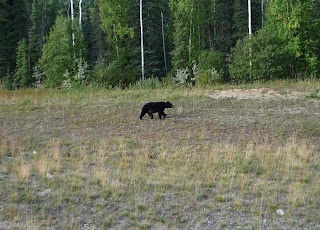 I find it funny that the bear silhouette on the  "Caution Bear in Area" sign and the bear we saw both look the same. (the pose)


Oh well, till next blog, keep on Caching!!!
Magicman65