So, we are sitting at home one day and a new cache gets published...normally I head out the door like a chicken with it's head cut off without thinking. For those that don't know FTF stands for "First To Find." It is a term used in geocaching for being the first to get to a newly published cache. Sometimes there is a prize for the first finder, but mostly it's just a cudo's for the first cacher to find it.

Lately though I have had to think a bit before flying out of the house, to chase the elusive FTF. (At the time of writing this I have 277 FTF's)
You see my wife(Angelcheeks) is 9 months pregnant and even still within this past month in the final stages of her pregnancy, she has found several FTF's with me, including one on her due date, as she is a real trooper!!!

One night though with just days to go before her due date, a new cache gets published!! After looking at it, we notice it is listed as a 5/5 (What this means is a level 5 Difficulty rating, and a level 5 terrain rating) For a difficulty 5 rating, it means it will be hard to find or you may need some form of instrument to access information. (We have found caches that we needed a black light, mirror, QR reader, bar code reader, and other weird items) For the terrain rating this normally means, that you will need some form of special equipment of some sort to access the cache. (Scuba gear, boat, climbing gear,etc.) As much as I wanted to get this cache as I did not have a 5/5 cache as of yet, I knew we would not be able to at this time. Maybe down the road!!

The following day we received a text from a very good friend of ours(also a cacher) asking if we went to get the new 5/5 cache yet? He was interested in going to get it, but was missing the piece of equipment(boat) needed to get to the cache location. I offered ours to him. Just then my wife said why don't we all go?  She did not want to miss out on the 5/5 or the FTF, cool!! So we devised a plan of how to get us all to the island safely as my boat only holds 3 people. We set a time to go, loaded the boat onto the car and started getting ready.

Our friends(C2C2C and Toby and me) came over and we were off to the lake. We had everything we needed and even some things we may have needed to retrieve the cache. We arrived at the first coordinates, and my hunch was right as to what we needed to get the second set of Coordinates. When we plugged in the co-ords the map showed it to not be on an island but actually on the other side of the lake. Why is it a 5 terrain, if you don't need the boat, hmmmm.

We proceeded with the original plan and loaded the boat into the water. We made our first trip out with 3 in the canoe and realized the water levels had risen and the map was not current, it was an island. We left Angelcheeks on the island and headed back for Toby and me. 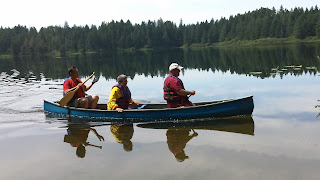 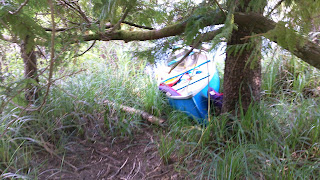 Once we were all on the island we proceeded to head for GZ. There was no trail of any kind, just lots of salal to bushwack through.
Our legs were getting scratched up, but we came to find the cache, so we persisted. All of a sudden Angelcheeks said "Found it" We rushed over to the spot and it was nice to see a blank log book!!!


We all signed it and were excited to have been able to make the trip as a team!!!

The trip back was easy as we knew we had accomplished something cool. Crossing a 5/5 off our list of caches was complete. Although that does not mean we will not go after another difficult cache, just next time we will do it with a baby in tow. lol
Until my next blog, keep on caching!!!

A great big thanx to "Let's go Caching" for placing this awesome cache!!