One night my sister, from Alberta sent me a link about something to do with Geocaching she said. It was a link to a webpage from AirTransat about some geotours including the one in Richmond. They had placed lots of TB tags in one of the caches and gave a hint as to which one, and were asking cachers to move them around.
Oliver and I headed out the next day and found the cache with all of them in it. There was still 35 of these tags still in the cache box. We took one and started it on its journey. Not sure if there are any prizes for doing so, but I thought it would be interesting to see how far it travels to. The webpage for the info can be found by clicking "HERE" 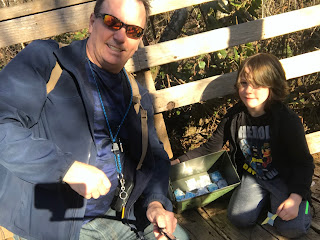 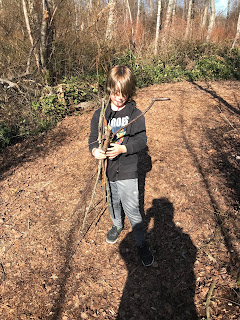 After we walked the trail at the place we found the tags, we went and did a couple more caches on the Geotour.

Oliver and I were lounging around one morning when all of a sudden a new cache got published less than a kilometre away from home, so we raced out the door and went and made the find. We even got a starbucks gift card for being the First to find!! YAY!!!


One warm sunny Saturday we went over to North Vancouver to grab a few caches. The first one we got was an Earthcache (I need 9 more to complete a challenge I did in Las Vegas) It was a cool one called Nephrite Jade Earthcache 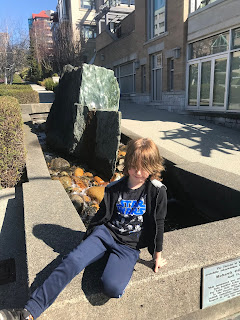 The next one was a puzzle cache that I solved online a couple days before, but I wont give you the name as I don't spoil it.
We then headed away from North Van and headed to Burnaby to grab a couple challenge caches that I have completed called "31 for 331Challenge" and "41 for 441 Challenge"
These were challenges for having certain amount of finds in certain Difficulty/Terrain categories. 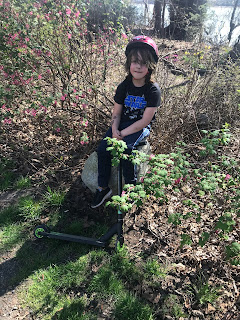 We then headed over to New West Quay to have a nice walk down the waterfront. As you can see from the pictures, Oliver likes to have his pic taken on top of rocks. 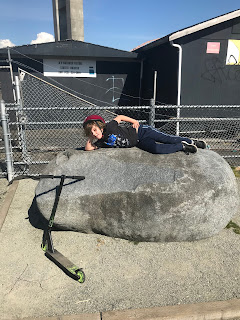 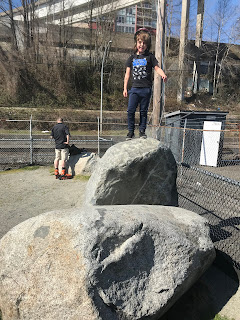 Geochallenge of the Month


The Geocaching Vlogger has a monthly Geochallenge that he puts out to the caching community, and when you complete it, you email him and then your name goes into a draw and you have the chance to win a cool geocoin. I was lucky enough to win one several months back for one of the monthly geochallanges he put out. For the month of April, the geochallenge was to find a cache either in a Front Yard or inside a building or business.
Oliver and I went out to Maple Ridge one day to do a Multi cache called "CHC150-Memorial Peace Park" 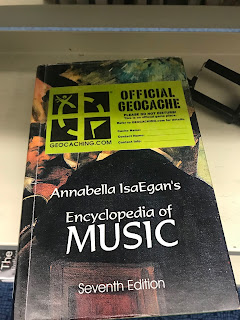 We had to find 3 different locations within the park and gather clues to reveal the Dewey* Decimal number of a book in the nearby Library. 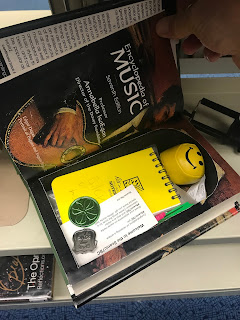 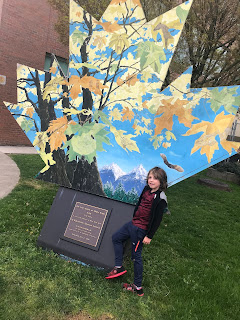 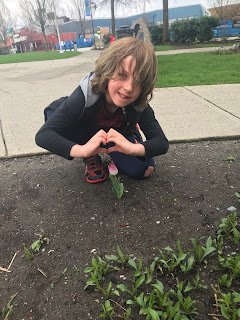 It was a cool cache and we made a video of us doing the stages and finding it in the Library. We have actually been making several movies of our caching adventures which I will be putting online on YouTube as a GeoAdventures YouTube Page.

*The Dewey Decimal Classification System is the most widely used method for classifying books in the library. This system is a general knowledge organization tool that is continuously revised to keep pace with knowledge. It is named after Melvil Dewey, an American Librarian who developed it in 1876

Well that's it for this month,
Keep on caching!!