Caching my way into the New Year!!!


A great start to the New Year, on Tuesday, January 1st my little boy and I went caching and found 7 caches close to home, the following weekend he woke up, on a Saturday and said "Can we go geocaching Daddy?" (he loves caching with his daddy)
So we went to the New Westminster Quay for a few caches and some breakfast.


On January 12th, Oliver and I did a 8km walk and went to 18 caches, but I had already found 8 of them in 2012, but I needed the clues from inside them, to use towards finding the Final cache, we also DNF'd (Did Not Find) 3 caches. They have been DNF'd by the last few people, so I assume they may be missing. (Update: They were missing but have now been replaced) 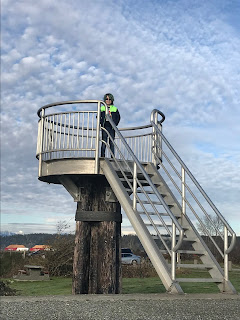 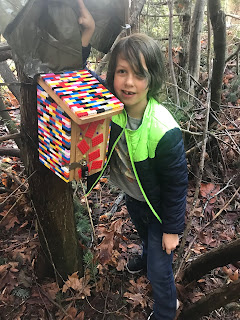 Oliver and I went and found this cool Lego cache called "Legggooo to the Woods!!" on Groundhog Day(Feb. 2nd)
It was a very cool field puzzle cache where you had to count specific colored Legos on the cache box to get the numbers for the combination lock. He loved it!!! Well worth the trip and I gave it a Favorite point!!

I decided to take a quick trip to Las Vegas in February for a little getaway. I went to see several shows, and also grab several caches. When I travel, I don't just go for every cache in my path, I always seek out ones that have several favorite points or specific caches such as Virtual caches or challenge caches, or caches to fill in my difficulty/Terrain or other charts, or cool looking puzzles. I have already got most of the Virtual caches in Las Vegas from other trips as you can see in the pic below. 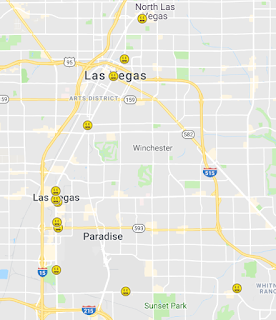 These were the caches I had planned to get while there. Several Traditional's, Puzzles, and Challenge Caches, plus 3 Virtuals, 1 Earthcache, 1 Letterbox cache, 1 Wherigo, 1 Multicache, and 1 DNF'd cache.(from a previous trip) A total of 44 in Vegas and area that I will be trying for, plus several on route to the airport in Bellingham. 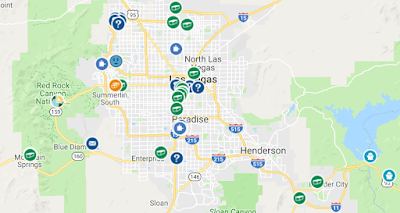 The following pics show the 24 most favorited caches in Las Vegas and area: 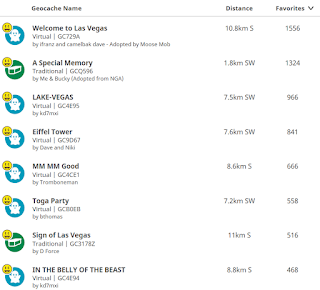 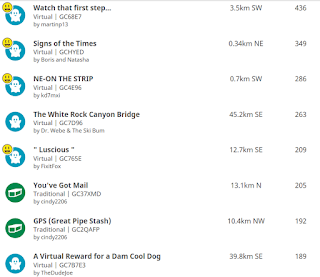 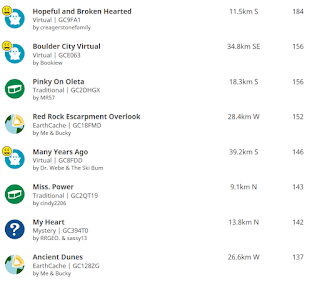 As you can see, there is only 9 out of 24 I have not found of these highly favorited caches. I am hoping to change that during this trip. Wish me luck!!
Plus I may try to do another 7 icon day while there. (Get 7 different Icons in one day) Have done this a couple of times already. Looking to break past the 7 icon day and go for more at some time.


PS: On the right hand side of this webpage is where you can find my YouTube, Twitter, Instagram, and Google Plus links. Please feel free to check them out and follow or subscribe!!!
NOTE: The highlighted or underlined words in my blog can be clicked on as they are links to other cool stuff!! Also if you click on any of the pictures they become bigger!!!

So, it's Monday morning and here I sit at the airport in Las Vegas waiting for my flight home, putting the finishing touches on my blog before hitting the publish button. Next months blog I will let you know how I made out with the caches I had planned to get here in Sin City!!
Vegas was a blast.....More about my trip in next month's blog. 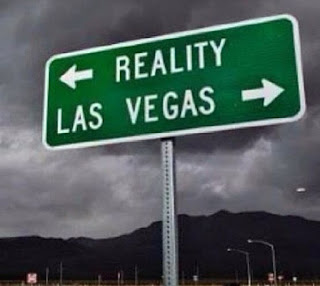