Alberta trip and the New Year!!

For the last few years that I have been going to Fort Saskatchewan, the town I grew up in, I have tried to get a cache at the Fort water tower called "Landmark 1956", but have always came up empty. This trip in -30C weather, I finally found it. 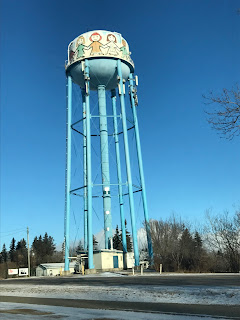 I also got a cool Lamppost cache while in town called "100 Ave Cache"
Usually most lamppost caches are a switch plate or the skirt at the bottom, which I have found many of these kind, but as you can see by the pics, this one was a bit different!! Very Clever!!
Check out the 3 pics below: 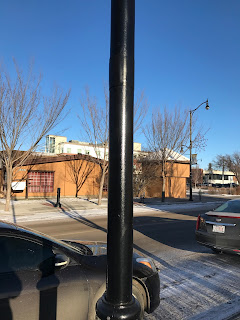 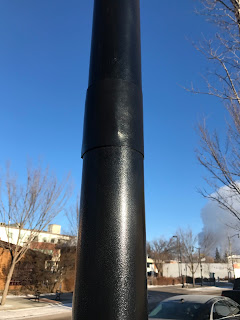 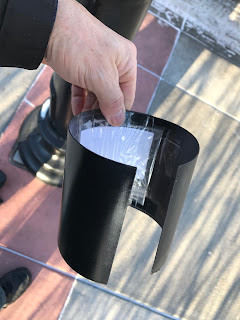 When I travel, I always like to seek out Challenge caches or other cool caches. Went and signed a challenge cache called Top 10 Challenge Cache when I was in Edmonton. If you look at my top 10 cache list in the pic below, you will notice one called Gold Star-Graduation Day "Foundations"
To get this cache, you need to do 10 other puzzle cache in the series to get the co-ords for it. So my top 10 caches, is more like 20 caches to complete. lol 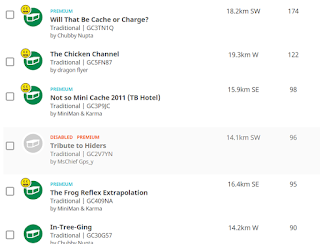 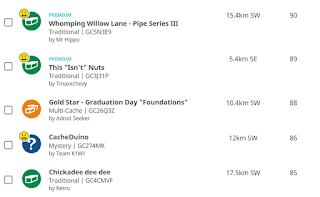 Also while in Alberta, I got my Last day of the year souvenir!! 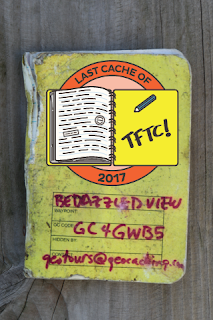 And back in BC the next day, on the way home from the Airport, I got my New years day souvenir!! 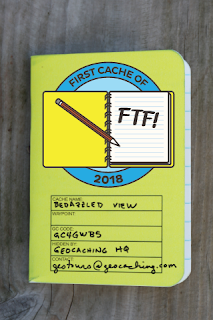 This cache has been on my watch list for some time as it is one of the top 10 favorite caches within 20 km of my location. I did one like this back years ago when I lived in Courtenay, over on the island. You retrieve the box, which is the actual cache but it is locked. You have to get it to the right destination so it will open. Sounds weird, I know...when you press the button on the box, a screen read something like "4.57 KM away" but no other info, no direction at all. You have to make some calculated guesses and have a little luck on your side. I was hoping to grab it sometime back, and messaged the cacher who had the TB tag at that time, which you need as it has the location of where to get the cache box from. The cache was shortly disabled after that. I then waited and watched the cache page until it was up and running again. I kept missing the TB tag, so I did the next best thing and messaged Skinaglow60, the cacher who had retrieved the TB tag with the info as to where the cache box was located. She had already gone and picked it up. We figured out a time that was best for both of us to meet up, chatted for some time over coffee, and then headed out for an adventure. We enjoyed each others company and we even grabbed a few more caches on the journey. I was glad to get this cache off my list and in the process I have gained a new friend. Thanx again to Skinaglow60 for allowing me to tag along, we will have to get together again soon.

I got a notification for a new cache the other day so I headed out to grab it. Got the FTF and then after getting back home I got a call from the Port Moody Police. Someone must have spotted me putting it back and called them. One of the Officers went and retrieved the cache and took it to the police station. My licence plate was recorded, so he called me to ask what I was putting on the sign. lol. After explaining, and he knows what caching is, he said he will go put it back. Too funny!! He said he may sign it before he puts it back.

The Fraser Valley Magic Circle had their awards banquet the other night, and they have some cool looking awards. As a complete surprise I won the "Celeste Evans" Magician of the Year Award!! 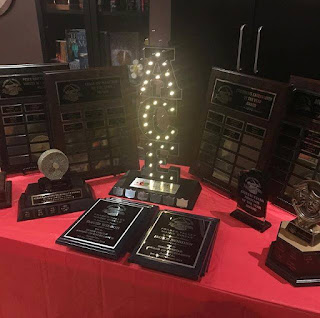 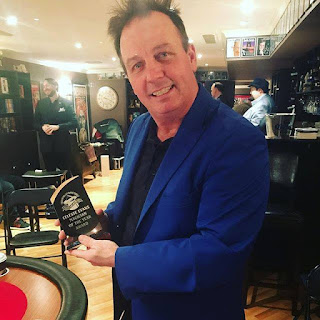 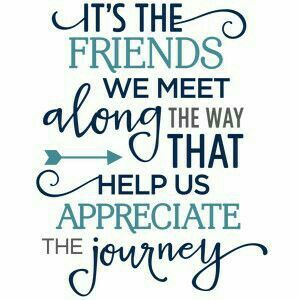