Land of the midnight sun!!!


This month I went to Inuvik, Northwest Territories, the land of the Midnight Sun, to do a couple of Magic shows for the Inuvik Firefighters Ball.  While there I was able to grab several caches including a virtual cache. I also received a new geocaching souvenir.
On the trip up there we flew across the Great Slave Lake. Several years back when I was touring with Attila the Hypnotist, we actually drove across this lake on the Ice roads on a trip up to perform in Yellowknife and Fort Smith. Very scary heading out onto the lake with a vehicle.

Made sure to grab this virtual cache called The End of the Road while there. I believe this is the oldest cache in the Inuvik area, placed back in 2002. They actually nailed a Travel Bug Tag to the bottom of the sign and you need to get the number off it. 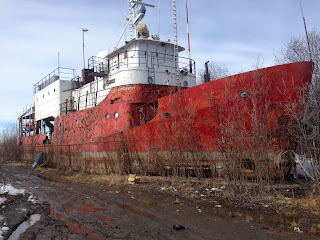 This was a cool bolt cache placed on the anchor of the GSI Mariner. A ship that is now on ground and out of commission.
The GSI Mariner is a Canadian research/survey ship. It was built and used originally by Geophysical Service Inc. (GSI) to record seismic data on the Mackenzie River delta and Beaufort Sea in the Arctic Ocean. Later it was owned by other companies, including Halliburton Canada. It is currently beached on the banks of the Mackenzie south of Inuvik, near the beginning of the Tuktoyaktuk Winter Road.
It was built in 1971 in Edmonton, and taken up in sections to Great Slave Lake later that year to be launched onto the Mackenzie. GSI ran surveys and did seismic research with it during the summers and beached it over winters, voyages that continued as Halliburton took over GSI and then after the company was reincorporated. Whether it will sail again is not known.

I have been working in the Downtown area of Vancouver lately and have been grabbing a few caches on the way to the workplace. There are some cool caches around this city. Found one the other day at a monument that I had driven by for several days and thought this was a cool thing. (But I also kept saying to myself, "There must be a cache at that spot!!") 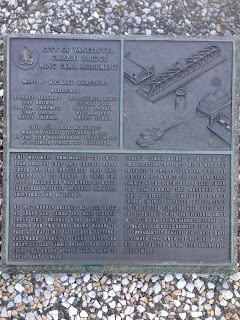 The ring gear monument was installed on Oct. 16 1987.This monument commemorates the swing span bridge that once crossed False Creek, and the industries that once thrived on its shores. Up until the 1970's False Creek was ringed by major industrial activity including Sawmills, Shipyards, and Rail yards. On May 2nd 2000, at approximately midnight, the “big blue switch” was pressed and selective availability on civilian GPS receivers was removed. Twenty-four satellites around the globe processed new orders, and the accuracy of GPS technology improved tenfold. Prior to this date, only the military had the ability to receive accurate GPS readings. Now, the world and all its wonderful people could pinpoint their precise location.

Sixteen Years Later
Sixteen years and over 2.8 million geocaches later, the game is larger and more diverse than it’s ever been. Happy birthday geocaching! It’s been a pleasure watching you grow.