I'm still working on getting all the souvenirs for the Geocaching Road Trip '15 that started June 19 and runs until sept.2nd ( #GeocacheRoadTrip15 )
(Check out a previous "Blog" to get the beginning story, on the Road Trip '15 Caching)
The plan to get the D5 or a T5 was to go with another cacher out on Burnaby Lake to get the 5 caches in the lake that are all Terrain 5 caches. I arrived at the lake early, and went to the boat launch area and it was super busy as I pulled into the parking lot at 830am. They stopped me in the parking lot and said there was a rowing regatta going on and no one was allowed to enter the lake with any type of boat. I will have to go another time.
Well now what, I headed back home a bit depressed as I was looking forward to gaining the souvineer for getting a Terrain level 5(T5) or Difficult level 5(D5) cache as well as getting some lake caches. A few days later I decided to get up early and go grab a D5 cache that was a bit out of the way on my way to work. It was a chirp cache(A GPSr with chirp enabled technology is needed)
It wasn't as exciting as getting 5 lake caches but at least I got my souvenir. Will still be going for the lake caches at some time in the future. 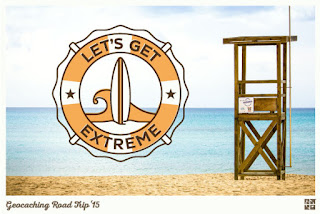 The second souvenir that came out was for going to an event, I was able to accomplish that shortly after the Extreme souvenir. It was a meet and greet event at a local ice cream shop. I wasn't able to stay too long but was able to meet a few new cachers. 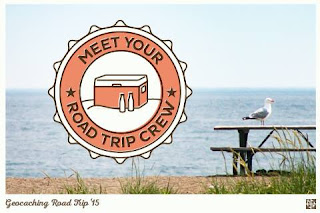 Went out and got a few caches on the long weekend in August. I was able to get a challenge cache called 10 YEAR CHALLENGE where you need to find 10 years worth of Cache hides on your Jasmer chart. Popular in the United States, the Jasmer asks geocachers to find one cache hidden in every month since geocaching began in May 2000. As of today, that means finding 184 caches, 1 of each that was hidden each month since caching started. To give you a sense of the difficulty of this challenge, there are under 150 caches hidden in 2000 and only 3 that were hidden in May 2000(The month Geocaching was born) still enabled. I have not found all 184 months, but I have found over 11 years worth(169 months total). More about this chart in next months blog.
If you are confused by all the numbers in this blog, you should read next months blog for sure!!

After finding this one with no problem, other than having a fight with the blackberry bushes(they won, I knew sandals and shorts would not be to good) and also seeing very fresh Bear scat on the trail, I headed to get an Earthcache so I could get my 4th of 5 different souvenirs for the #RoadTrip15 challenge.

Then I met up with fellow Magician Close Up Matt who just recently got started in geocaching to go and grab 6 other caches. Had a nice walk in a large wooded park and got to see an owl up close. Very Cool!!!

Flew to Las Vegas for a large magic convention with about 1400 other Magicians, so thought while I was there I would grab some cool caches. Because of the busy schedule of the convention there was not much time to get away from the hotel.


Went out to a small LPC(Lamp Post Cache) that was near the hotel on the first night at about 1am with Angelcheeks(my lovely wife Jenna) and another Magician friend who was interested in seeing what caching was all about.


I got up early the next day and headed towards the strip. I walked about 3 km to the strip before finding my first cache. It was a virtual cache at the MGM Grand. I Found several virtual caches along the strip at different hotels and locations.
Found a couple of traditional caches as well. I had planned to do a puzzle cache but it would have meant walking another 1.3km out of my way and then back again. In the heat (about 32C) that just did not sound like a necessary cache to get.


I ended up travelling 8.8 km on foot in the hot dessert heat. After I got the last one I was after at the Flamingo hotel, I grabbed a cab and headed back to the Magic convention host hotel, "The Orleans."
Grabbed a total of 2 Traditional caches and 7 Virtual caches in 3 hrs.


I saw a lot of interesting sites and cool things as well as doing some cool things such as ziplining
thru Freemont St, and going in the High Roller(The High Roller in Las Vegas isn't your average Ferris wheel. There's nothing average about it. And it's not really a Ferris wheel; it's an observation wheel -- the biggest in the world at a staggering 550-feet-tall.
Yes, you read that right: 550 feet. That's nine feet taller than the Singapore Flyer and 107 feet taller than the London Eye. It currently holds the Guinness World Record for largest observation wheel.)

I also jumped off the stratosphere, at SkyJump Las Vegas.
I did a similar jump several years ago in New Zealand, but this one is 200 feet taller at 855 feet above!!!


I was also able to log a virtual cache while I was up at the top of the stratosphere.

YES, besides having fun, seeing shows, and Geocaching, the main reason I was there was for MAGIC Live 2015. The convention was 4 days of Magic, fun, and surprises. And being held in one of the funnest places in the states was just a bonus. There were many special guests and lots of well know magicians with the likes of David Copperfield even. I won't tell you too much about it other than to say it was an experience!!! And besides, you know what they say, "What happens in Vegas, Stays in Vegas"

The day after getting back from Vegas, I went out and got a puzzle cache to get the Last(sorta) Souvenir. I decided to do a puzzle that I have been wanting to do for awhile that is actually inside a Library.


After getting rewarded with the puzzle cache souvenir I received one last one for getting all 5!! Just an added bonus to say Hurray!!!

Well that's it for this month
Keep on caching
Chris Yuill
Magicman65
at August 14, 2015