I had the opportunity a couple of weeks ago, to go and get some of the Skunk Tales caches. They are all puzzles and when they first came out I started working on them to solve them but had no luck. I had set them aside for the time being and thought I will work on them when I have more time(ya, who ever really gets more time???) A caching friend "The Pollywog" sent me a message saying he was gonna come over from the island to get as many as he could. He had them all solved and was wanting to grab some. I spent the day caching with him. It was a fun filled day and we found 9 of them(I believe there is 19 in total) I will one day soon go back and get the rest of them, plus there is some puzzles to complete within the puzzles. Very cool caches. Thanx again Paul for allowing me to come with you on the adventure!!!

This month I also took a trip to Alberta where I would stay in Fort Saskatchewan and Edmonton. It was just me and my little boy again on the road, except this time we would fly and get a rental car when we arrived. I noticed there were many challenge caches(you must complete some form of requirements before being able to log them) in the Edmonton area so the plan was to get as many as possible as I have completed several different tasks that they were asking for. One of them had me searching for a specific cache here at home that was published on a specific date, which was tough as there was only a couple in the area, and the one I did was a puzzle. But I got it just days before I headed to Alberta!!!

In total while I was in Alberta for 8 days I found a total of 57 caches, 12 of which were challenge caches(I had planned to get 13 but just was not able to find the time for one of them) I also got 1 FTF while I was there, and a new icon on my stats page(More about that later in this blog)

About a month back some caching friends from Vancouver island Brett and Leifa AKA, The GO! Team, were in the Vancouver area and I got a chance to go grab some caches with them. We got talking and they said they were going to go to the GPS Adventure Maze that was in Edmonton right now.(It travels around the country) I asked when they were going and found out I would be there at the same time. We made a plan to meet up and go do it together. I already did it some years back at "The Best of the BAD" Mega event in the Drumheller, Alberta area, but was not able to log it as it was no longer an event, but it was still open for people to do it. (We missed logging it by a day)(this cache would give me a new icon, on my stats page)
On Sunday May 31st I met Brett and Leifa and we proceeded to head into the Maze(Basically it is a great introduction into the world of geocaching for new people that wish to find out more about it.)
Thanx again Brett and Leifa for allowing me to tag along!!!

You get to search for some caches in the maze as well as read, and do some cool stuff that is associated with Geocaching. 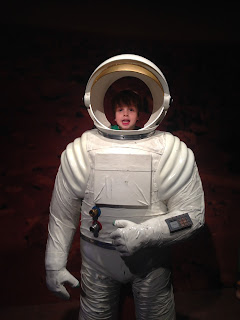 They had a body science exhibit, a science experiment lab, and a space exhibit. Very cool and interactive stuff. We eventually said goodbye to The GO! Team, and headed on our way back towards Fort Saskatchewan, but grabbed a few more caches on the way.

One of these was a challenge cache called "200 Consecutive Days of Caching"
I was able to log this one as I had previously did 400 consecutive days of caching from Jan. 1/13 till Feb 4/14
The last one I grabbed that evening on the way back to where I was staying was just a simple traditional cache called Box-O-Geoart. I found it very quickly but it would turn out to be a bit more challenging than I imagined. As you can see from the picture, it appeared to be a decent sized box with not even a lock on its hasp. 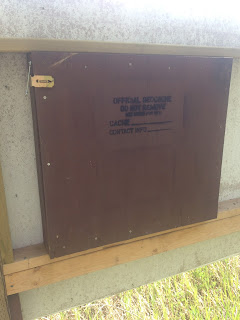 But when opened there was 48 little micro caches
with magnets on a blackboard made of metal. Inside one of them was the logbook. Now to find it.
﻿
﻿
I ended up opening 43 of the 48 containers before finding the logbook. Yikes!!! I was then able to leave some artwork behind for the next cacher.
﻿
The following day I was planning on heading out to Elk Island Park and then to Jurassic Forest with my little guy. I awoke and noticed that a new cache was published in the area(Yes I set up notifications when and where I travel) It was out towards Elk Island park.....awesome!!! So we had some breakfast and headed out for the day, we grabbed a few caches on the way out, and then grabbed the new cache as a FTF!!!(First to Find) We then headed into the park. 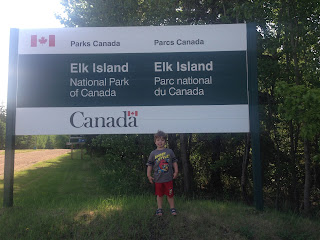 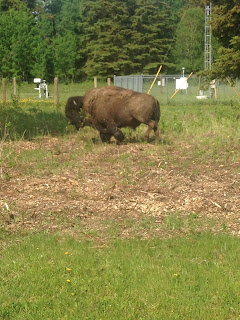 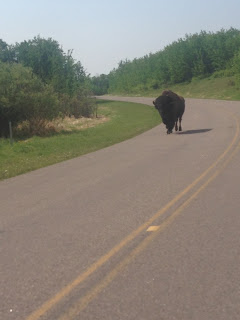 Saw a few Buffalo on the way thru the park. Grabbed a couple of caches while in the park also. This guy was coming down the highway like he owned it. lol

We then headed to Jurassic forest where they have very large animatronic dinosaurs. Very cool technology as they come alive as you walk along the boardwalk. 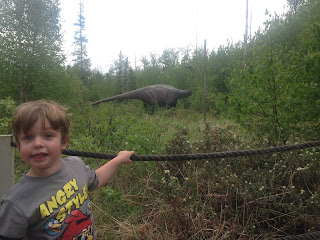 After leaving the forest we made our way towards Edmonton for supper. We passed thru a little town called Bon Accord where I have performed several times at a bar/night club when I used to live in Edmonton. We grabbed a cool cache in town near the skating rink. Not sure if this kind of cache would get published in BC as you can see by the pics (Bit of a spoiler if you ever are there to do this one, sorry) 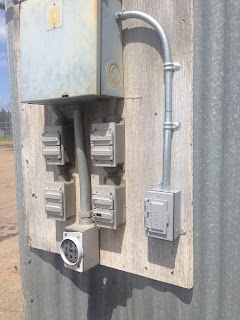 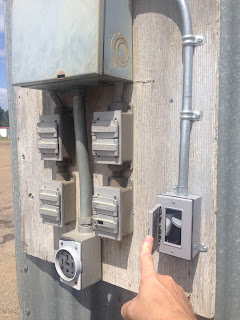 As you can see it is in a very dangerous spot, but it did have a tag on the side with the GC number on it to identify where the cache was.

The following morning it was raining so we decided to head to West Edmonton Mall to shop and go to the waterpark. Oliver loves waterparks!!! We had a great time and bought a few things while there, and then headed back to Fort Saskatchewan.
The next day we hung around town and grabbed a few local caches, one was called Lamoreux Letters
which was a Letterbox cache. (Letterbox cache is another form of treasure hunting that uses clues instead of coordinates) I had already came by this one a couple days before but could not see it, so I emailed the Cache owner to see if I was doing something wrong. They gave me a bit of a hint in the right direction. The cache page said go to a specific Landmark, reset your trip odometer and travel down the road 2.05km. I used my GPS and set a waypoint at the Landmark and went 2.05km. But on a GPS the distance is "As the crow fly's" or better known as a straight line from A to B!!! However the road had a couple of slight turns in it making the travel by car distance different than GPS distance. DOHHHH!!! Met up with a couple other cachers while on this road also.

There was three challenges that I got, that all had similar requirements to log it,
End of the world challenge and 100 in a day challenge and Geocaching 101 Challenge
Basically with all of them you had to have found 100 caches in one day. Since Jenna(Angelcheeks) and I did a day of caching where we found 200 caches, I was qualified to log all three of these caches.

We did a cache called Railroad Service in Fort Sask. which was at the Old Railway station. This is now a museum/visitors centre. When I lived here several years ago this was an active train station, now the trains bypass the city of Fort Saskatchewan. 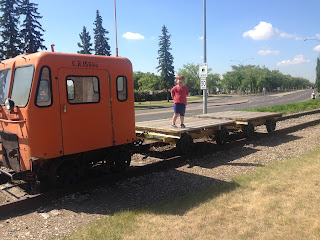 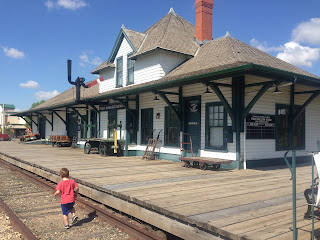 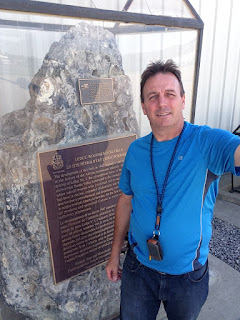 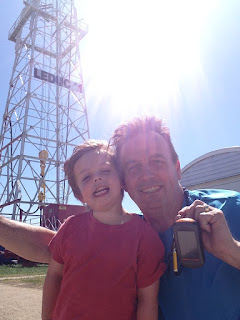 This was the last cache we would grab before heading off to the airport to fly back home. with 730KM on the rental car, it was a great trip with my little boy, and we had a lot of fun. What will my next adventure bring??? 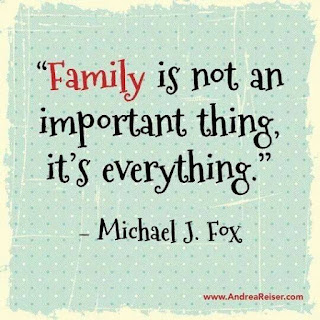