NOTE: The highlighted underlined words in my blog can be clicked on as they are links to other cool stuff!!

So I noticed one evening a cache got published around 8pm, but it was already about 830 when I noticed it and it was farther away, so I assumed I would not stand a chance on the FTF, so I left it alone. The next morning I was up early as I had to drive my father in law to the skytrain station. Looked at the cache page and noticed it had not been logged as of yet. 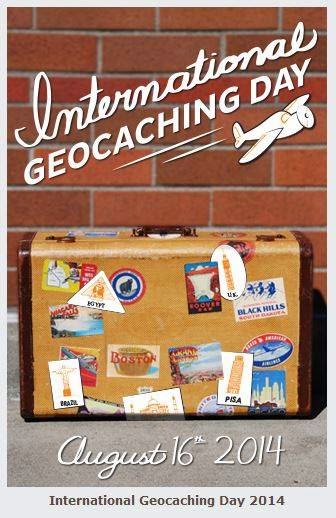 So after dropping him off, I headed to the cache, almost 10 hours after it was published. Not only was I FTF(First to Find) but I got my "International Geocaching Day" souvenir as well!!!

I also got another FTF at a small park nearby home. It was a multi called "Wouldn't want to waste the space" I made fast work of finding the first stage, and raced up the hill to the next set of co-ords.
After finding the final, I sat down on the nearby bench, where I could see the first stage, so I got to watch the next couple of cachers looking around for it, and shortly after was joined by some other cachers coming to try for the FTF. Sorry guys, you are too late....hehehehe! 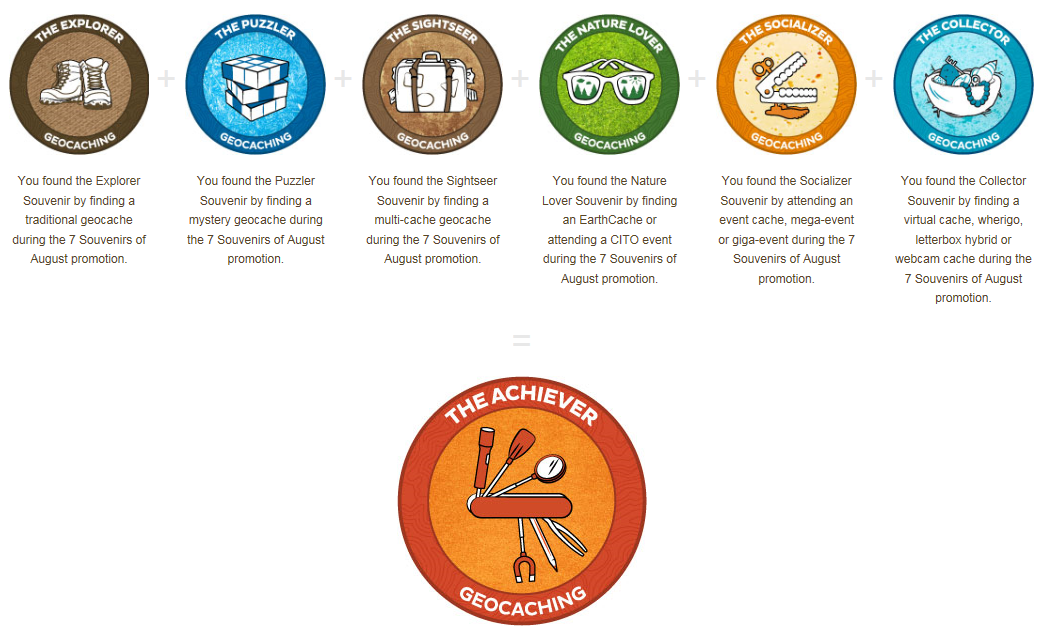 The Socializer:  Earned by attending an Event, Mega-Event, or The Block Party.  Went to the event "GC58G5D - Couple of California Cachers come Caching in Canada"

The Achiever:  Earned by unlocking the other 6 souvenirs in August.  All we had to do here was log our finds and check in to our Souvenir Trophy Case to unlock and lock in our achiever number.
Met a few local cachers I have not run into as of yet, and some from out of town including the Event hosts!!!

At the event we got talking about souvenir's(since it was the month of souvenirs) and I mentioned that I had a Texas souvenir, but had not yet cached there as of yet(I have been there, but was not into caching then). It was because I logged a travelling cache that was listed as a Texas cache. LostSailRs(the organizer of the event) asked what a travelling cache was. I was explaining and someone else had mentioned that there was only about 6 travelling caches left in the world. They are no longer allowed except for the ones that are already out there and active. I thought this was cool as I have found 3 of them.


GC8E37 "The corps of discovery" (Found at island spirit, and this is the one that I got the Texas souvenir from)

Upon further investigation into the travelling caches, I have found that there is still about 30-40 active caches that are travelling including one that is in the Fraser Valley area, which I will now have to go and find.lol


Speaking of the Fraser Valley:
The Fraser Valley Magic Circle had their annual picnic this month at out past presidents house. It was nice to see a great turnout with most of the members and some spouses showing up. It was an awesome BBQ with lots of food and chatting.


Third Monday Magic(FVMC) this month was the Children's Magician of the year competition. I had originally entered as I came in second in the Vancouver magic circles competition of the same name, but then pulled out two days before as I felt I did not have enough time to set up for the routine I was gonna use. Instead I got to be a judge, but next year I will be ready!!! It was a great night with several performers competing for this coveted award.

Back in April of 2011, some caches placed by TEAM KFWB GPS were put up for adoption. Since these were caches that were originally published in February of 2003(geocaching was started in May/2000 ) they have become pieces of history for geocachers. The Mid Island cachers(of which I am a member) decided to adopt some of them. Then they were dispersed to some of the members that would be able to take care of them. I was asked to adopt one, so I did. The plan was simple, take over the cache and go check on it and make sure it is still in good condition or fix it up, to keep it active. Unfortunately I was unable to get to it right away as it was quite away out on some back roads, that were not accessible at certain times of the year. We were finally able to get to the cache site in December of 2011. The cache could not be found anywhere but I came prepared with a whole new cache in an Ammo can fully loaded. PS Most cachers love finding ammo cans in the woods, versus micros.


This was the note I post in a log on the cache page: CODE OF SILENCE GEOCACHE
Drove in from the Horne Lakes side today, despite a wrong turn which led up the mountain to a dead end and having to turn around without rolling the truck, and having a tree across the road to hurdle over with the truck, plus a wee bit of snow on the road, we managed to reach the cache site. We looked for some time and could not find any tagged tree to start from, but found the only stump with orange paint. We did not however find the origanal cache box or contents. We placed a new container(ammo can) under the stump with the orange paint. It is in plain view as I don't think anyone will spot it unless they are there caching.(pics will be posted) If anyone does find the origanal cache container please let me know, I would like to place it inside the ammo can to keep it safe. This cache is a very historic cache and I will make sure it stays active.
I will be editing the cache page with some new coordinates to help out and to stay on the right road to the cache. Have fun and good luck!!!
Magicman65 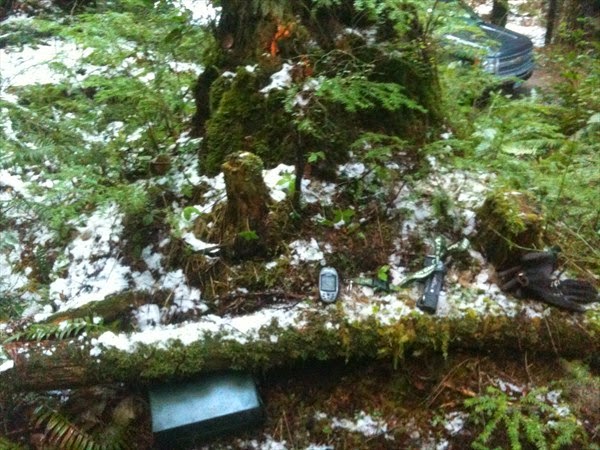 This is a pic I took in Dec/2011 of the new cache in place. And the lower pic is the ammo can loaded with a huge log book and lots of SWAG(stuff we all get) 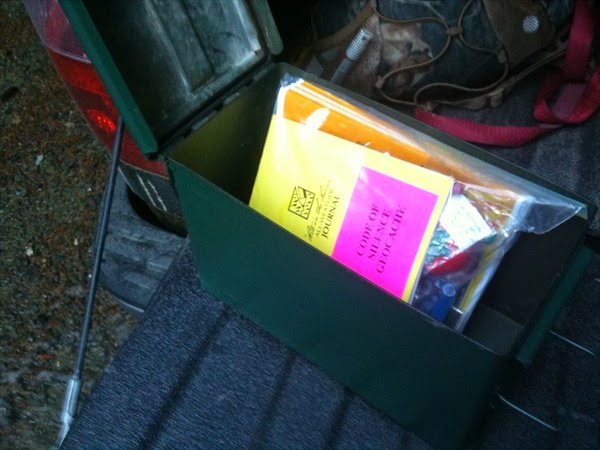 Cache in Danger!!!
Recently I received an email from a friend and fellow cacher, Slimshadysr. He was out that way caching and told me the area around the cache was scheduled to be "Harvested"
He removed the cache for me and held onto it so we could find a better location. Just recently he was back down that way and was able to place it in a new safer spot. Many thanx goes out to him, and I would do the same for anyone else.
Well that's it for this month
Keep on caching and keep the Magic alive!!
Chris Yuill
Magicman65 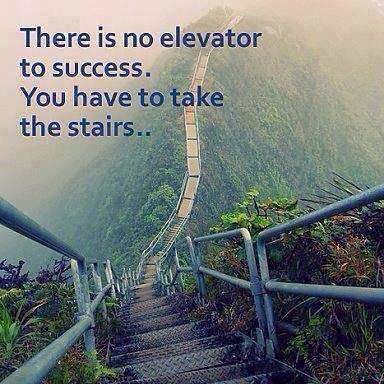