Day trip to the states, Earthcaching and Magic competitions

NOTE: The highlighted words in my blog can be clicked on as they are links to other cool stuff!!
PS: On the right hand side of this webpage is where you can find my YouTube, Twitter, Instagram, and Google Plus links. Please feel free to check them out and follow or subscribe!!!﻿
Went for a day trip down to Stanwood, WASH. for a BBQ﻿ with about 70 other Magicians and family's. It was the Meyers Annual Magicians Picnic & Extravaganza. 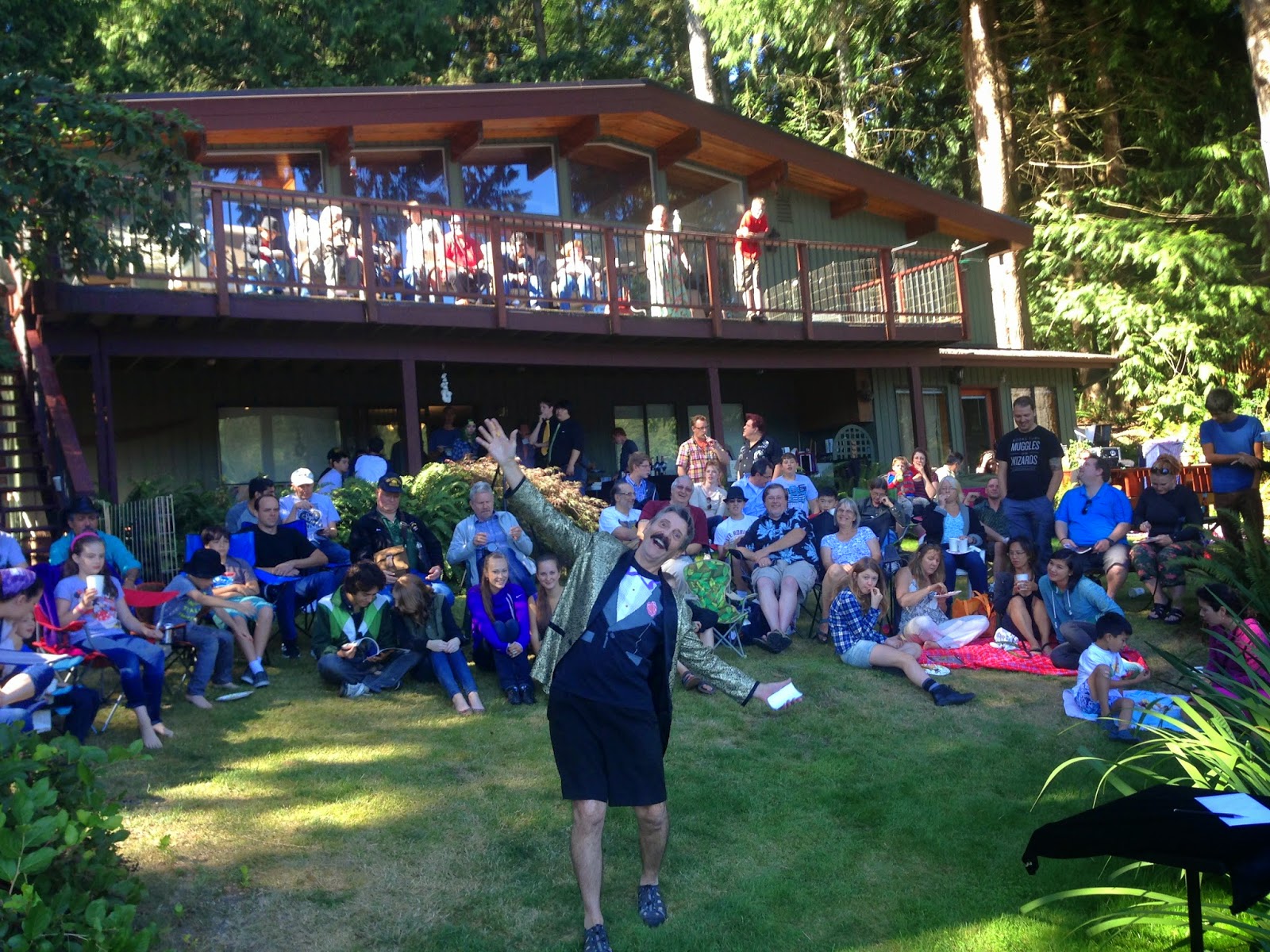 It was an awesome time and on the way down and back we were able to grab 5 quick U.S. caches.

We grabbed one called "Top of the Hill" which was just a small cache but the cool part was that It had a sign nearby that had mileage to several different locations on it. Some very cool places!! 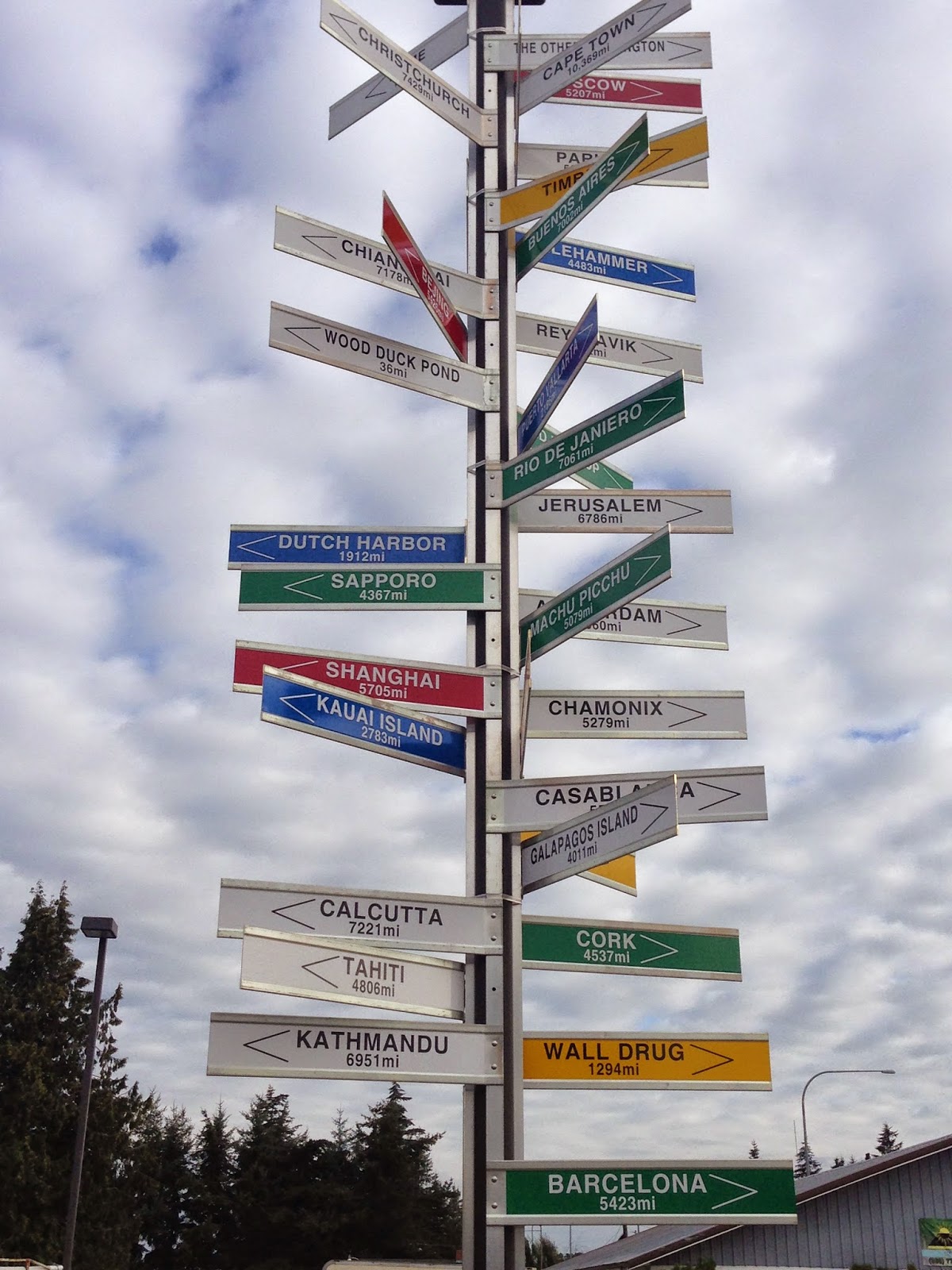 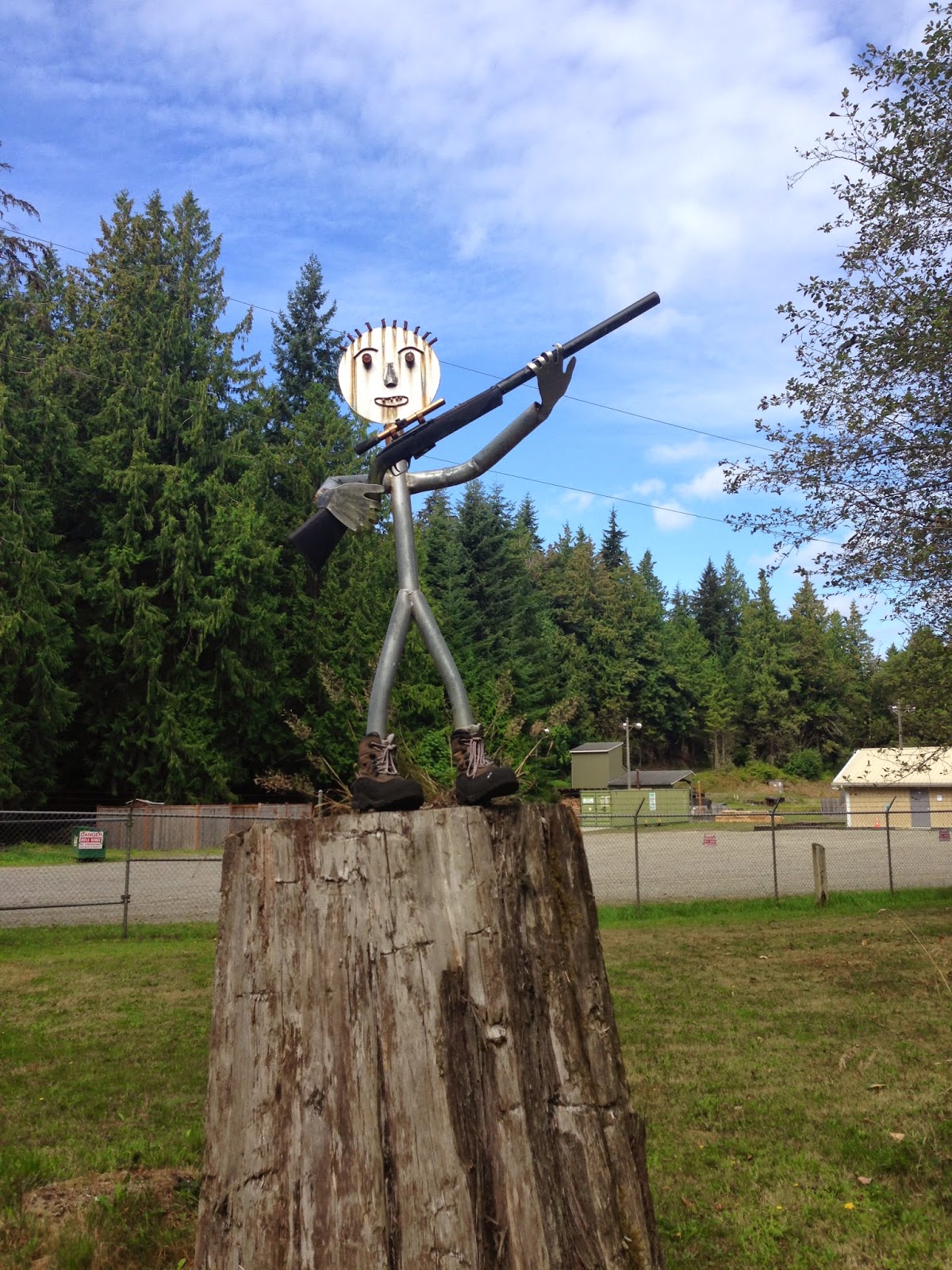 It was hidden in plain view behind this dude, who was guarding the entrance to the shooting range!! 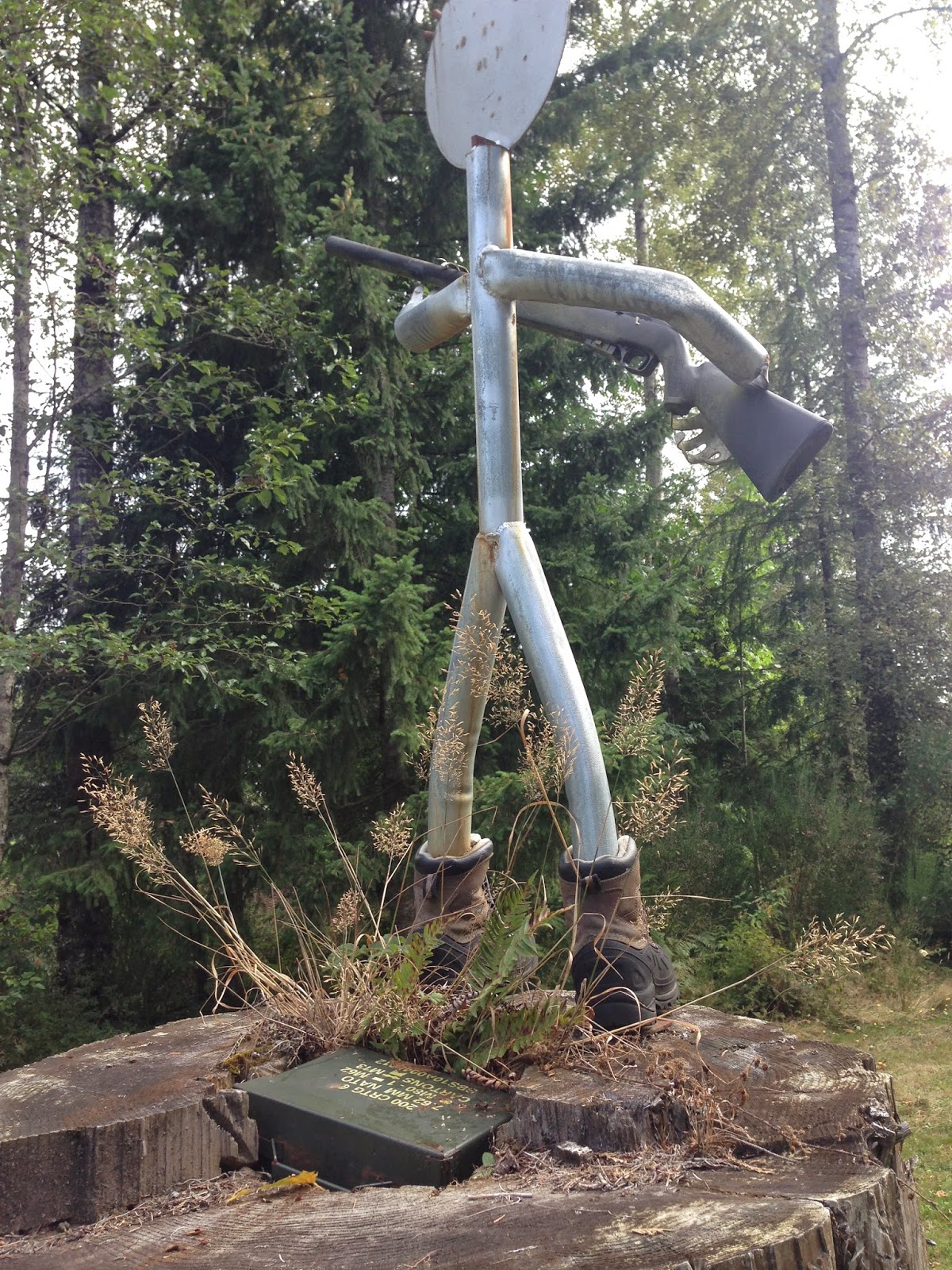 Speaking of BBQ's I also went to one that was called "P.C.A.M. Thank You"
It was put on by the organizers of the recent P.C.A.M.(see my last blog) and it was for all the people that helped out backstage and in front of the stage to make the convention be as great as it was.

Grabbed a few really cool caches lately, as well as a cool earthcache on the way out to Mission for the P.C.A.M. BBQ. While I was at the Artesian Well earthcache, there was a guy with a pump retrieving water using the pump and a large tank on the back of his truck. He shared a lot of info on the Well and the surrounding area.

Speaking of earthcaches, I was looking at the caches that I own and noticed that there was exactly 100 logs on my earth cache "The Rock Garden Trail" in Glacier National park. This earthcache was a bit of a challenge to get placed as at the time, caches were not allowed in National parks, although there was a few that somehow got slipped by. Because of my involvement with the B.C.G.A. (I was the VP from 2011-2014) and our involvement with BC parks, I was able to get the right phone number for the right person, to get my cache approved from the park officials. We had traveled thru there a few years back and I thought this place would make an awesome educational earthcache. It was not a spot most people would stop at, so by putting a cache there, I have gotten people(cachers) to visit this beautiful little spot of nature. It took me several emails, many phone calls, and lots of red tape to get this one published. I am glad to say that the National park officials are now allowing more caching within their parks.
I thought it fitting to send cachers Craft40 a small gift for being the 100th visitor to log this cache. The pic below is the stuff I sent them, congrats again Craft40!!!﻿﻿
﻿﻿
I had to head over to the island for a quick trip, and was able to grab a couple of cool caches while in Courtenay. 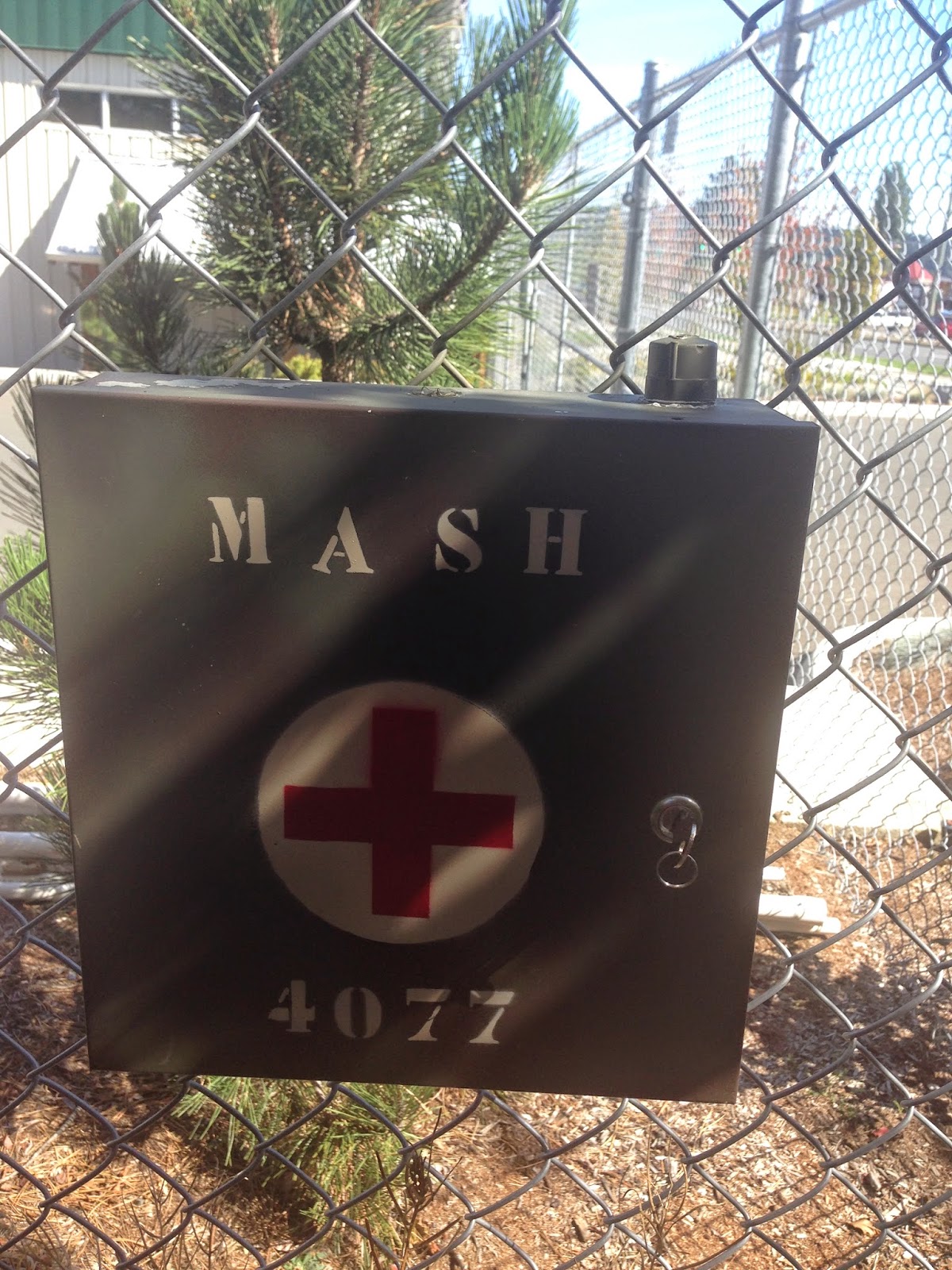 This was a blitz cache that belongs to a caching
friend of mine. Very well done!!! Tried to vote on it, but the blitz has ended

So I was at work one day and this new cache gets published. Hmmm, its only about 7km away from where I am working, and its almost lunch time. Off I go a bit early, lol. I head to GZ and when I get there I find this outdoor front yard mini library. Very cool idea. I guess there are several of these around Vancouver. I reach for the logbook.....YAY FTF!!!
Little Free Libraries are hand-crafted structures that contain constantly changing collections of books donated and shared by people of all ages and backgrounds. Most Little Free Libraries are placed in front yards, parks, gardens and easily accessible locations. The Libraries are built to withstand weather of all kinds and hold 20-100 books. Some Libraries are located in coffee shops, in or near restaurants and community centers.
Originally designed to look like a one-room school or a “house of books,” the Libraries rapidly took on a wide variety of sizes, shapes, themes and other attributes. There is no standard size and shape. Although many businesses and apartments may have had “take a book, leave a book” shelves for years, the idea of a network of unique structure with stewards, signage and social support began in 2010.
To be officially called a Little Free Library, a free book exchange must have an official sign, number and/or listing on the Little Free Library Map of the World. More Libraries are being registered every day. 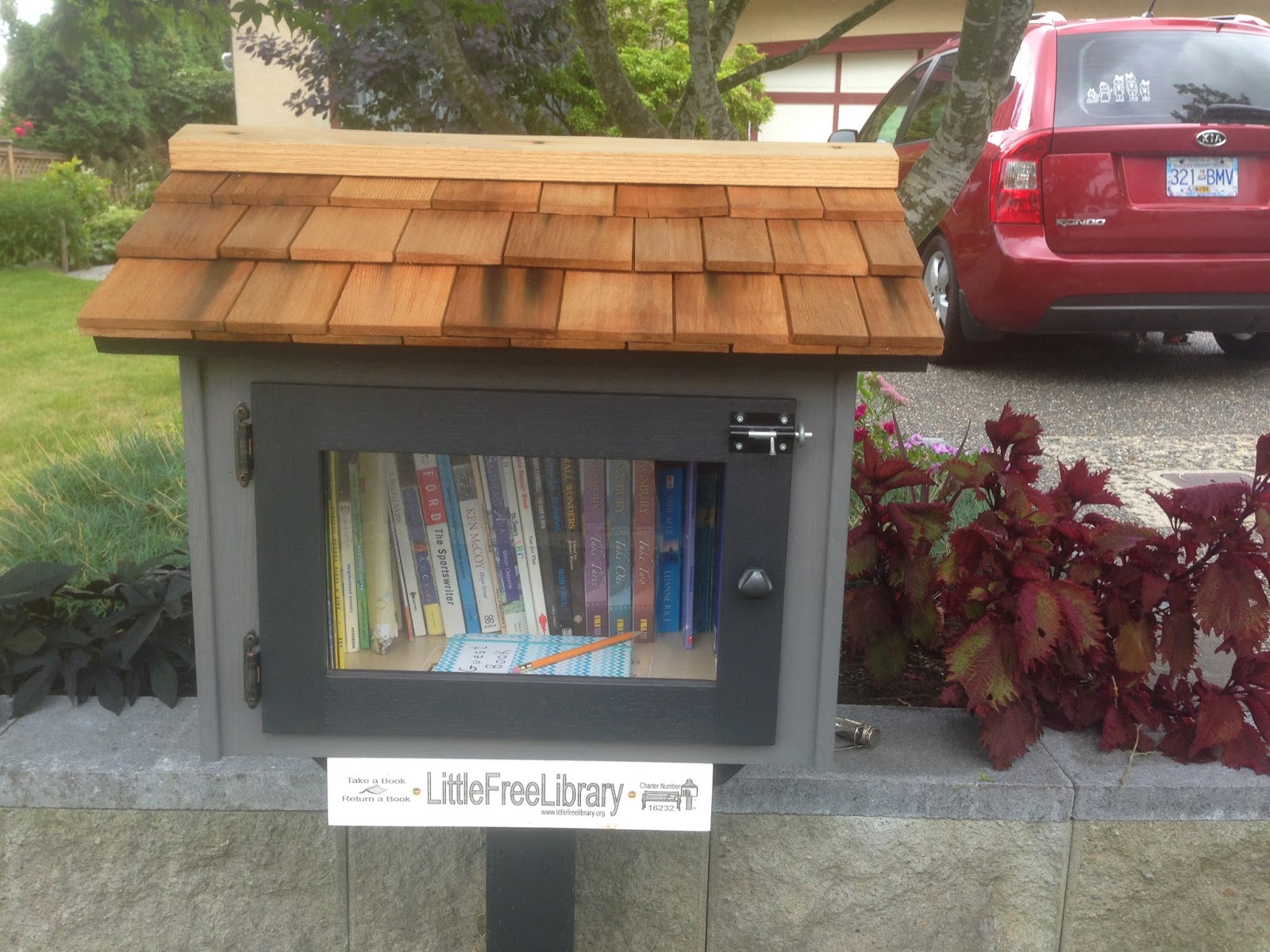 The FVMC(Fraser Valley Magic Circle) had their Comedy magic Competition this month, and I entered it. I had a lot of fun competing. This competition you are only allowed a maximum of 10 minutes, before being disqualified. My time was exactly 10 minutes....whew. After the judges scored us, I had won by 0.4 points!!!!
Next Month on October 12th is National Earthcache day, so you may want to grab an earthcache that day for a cool souvenir on your profile.
Well that's it for this month
Keep on caching and keep the Magic alive!!
Chris Yuill
Magicman65 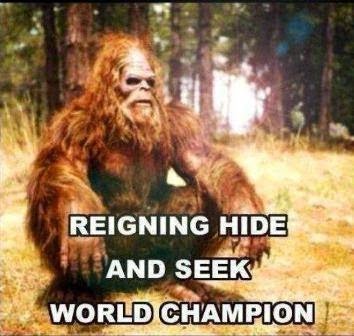