Southern BC Caching and Magic

Note:(Do not forget that the colored words are links to other cool webpages that you can click on)


Got to go to a evening of magic called “Share the Magic” in Vancouver, hosted and put on by a friend of mine in support of the food bank. It was a great show with four of my Vancouver Magician friends.


Went to the CAM Jam(Canadian Association of Magicians) the following day, and got to see a couple of great acts do their shows and also do a lecture. Learned a lot of cool stuff, and got to hang out with them after the shows.


While in Vancouver, I continued getting at least one cache a day and found a couple of cool ones while there.

﻿
A couple days in Vancouver and then off to southern BC for shows, but was able to cache all day on the way to each show. 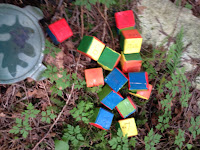 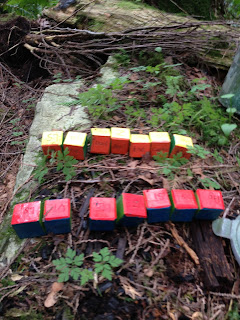 
Did many traditional caches along the route, and tried to do as many earthcaches as I could also. Always lots of cool info to learn by doing them.

I also was looking for as many Virtual caches as I could find also as I have started a Virtual cache challenge"Virtual Victory Challenge".
Groundspeak(Geocaching Head Quarters) is not allowing the placement of virtual caches anymore, they are only keeping the ones that were made in the past. They started a new thing some time back to simulate the old virtual caches called challenges, but it did not catch on and they eliminated them from the game. (I even did quite a few of them and even set up one of my own in the sign post forest in Watson lake, Yukon(Watson Lake blog) 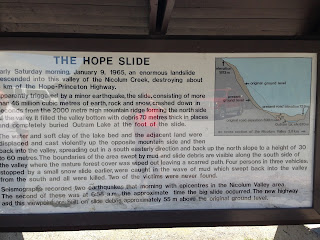 Heading down the highway, I stopped at many interesting places to grab caches.
I have done the Hope slide earthcache and the cache in the parking long ago on a past trip, but this trip was the time to do the cache out in the rubble from the slide. It was about 300 meters from the parking area. 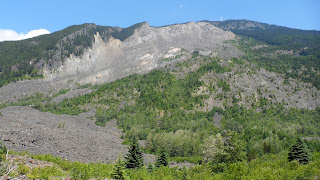 Half the mountain gone!!! 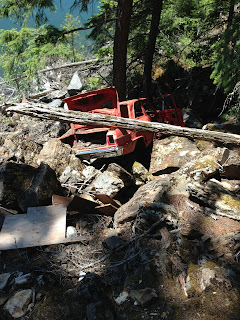 First stop on the tour was Crawford Bay.  Tried to find this terrain 4 cache called "Drive Safe" but could not find it. I don't think the driver of the red car found it either. It was near a Nude beach. (I kept my eyes closed, lol) 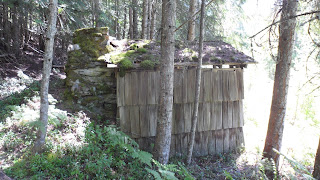 This is "Roses Cabin" Grabbed the cache there and learnt some cool history about the area and the last man that was hanged in Nelson, BC. 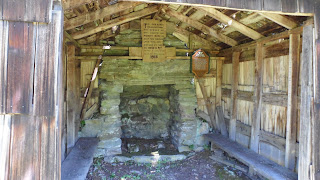 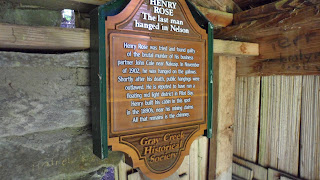 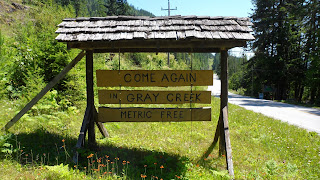 Not sure why they are Metric Free?? 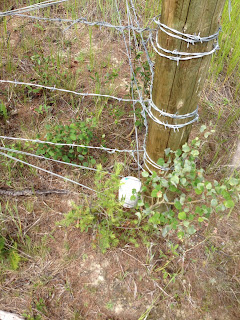 Can you spot the cache?? 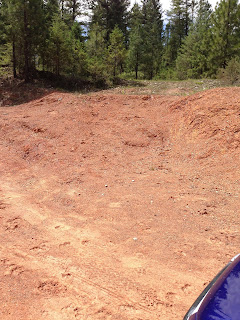 Earth Cache called "Mars on Earth" The rock and soil in this area was all reddish just like the surface of Mars.

I always like to take pictures of cool or funny signs if I see them while travelling. This sign was in a pub that I performed in at Bull River. Very cool that there was a cache right inside the pub!!! 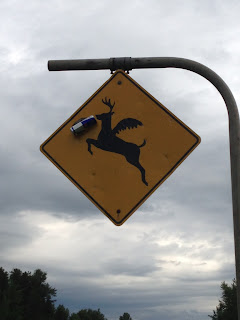 Red bull does give you wings!!! 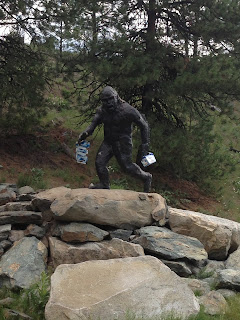 The Sasquatch is drinking again!! 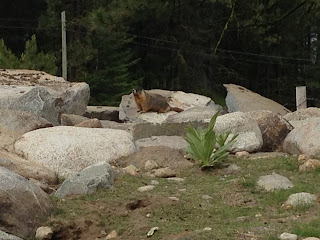 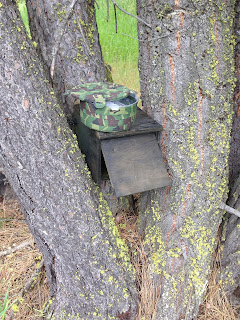 This cache was easy to find!! 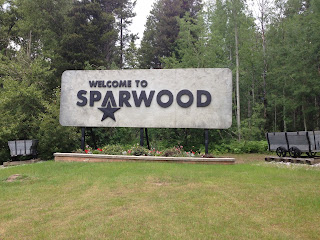 While I was in Sparwood to do a show, I had time to pop over the border into Alberta to grab a few caches as well including an Alta/BC border virtual. 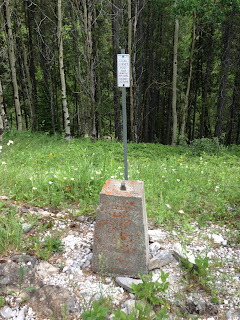 This is the post in the woods, that marks the border line of Alberta and British Columbia.
I also replaced a cache in Sparwood for a cacher that lives in Port Alberni, that is in the Mid Island Cachers group. 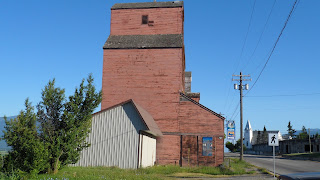 There has been a sign on this Grain Elevator in Nelson for some time. I have seen it before when passing thru. 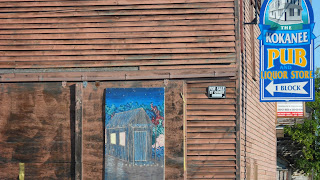 Can you see it...No not the advertising for the Kokanee Pub, but the smaller sign that the arrow that says "1 Block" is pointing at. It is a "For Sale" sign.  (Yes you can own this lovely grain elevator) 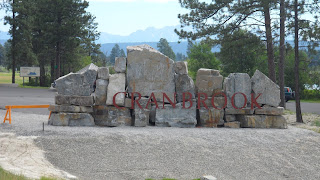 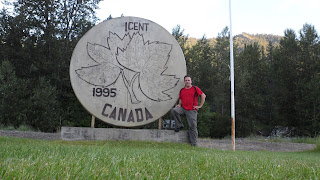 A Penny for your thoughts??

All in all on my week long trip I found 70 plus caches. Not a record(My record so far is 200 caches in one day) But a fun trip, with lots of caching and Magic.

Whats up for next month?


Jenna(Angelcheeks) and I will be heading down to Seattle, Washington to participate in the Groundspeak Block Party. The following day we will be heading to the Snowqualmie pass to go to the Ape Event where we will get to walk thru the Snoqualmie Tunnel which is 3.7KM(2.3 Miles) There is even a cache in the centre of the tunnel somewhere. But more about that adventure after it happens.... 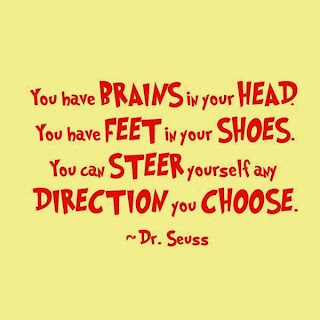