Please remember that the highlighted words are links and will take you to a different webpage that will be of interest!!!

Since moving down to Victoria we have been slowly caching and changing all the little green boxes to smilie faces. Plus I am still doing my cache a day challenge. We have noticed there are an awful lot of Puzzle caches down here. I have started working on them on my spare time. The worst part about heading out on a trail to grab some caches is, there could be a puzzle cache along the trail, and if you have not worked it out, you then have to come back to it later on. Most puzzle cache icons are shown on the map of geocaching .com in the middle of the ocean or a lake, but that is not where they are. You have to work them out, do the puzzle and then change the co-ords on the cache page by editing. (A feature that has been around for some time) I have recently come across an app for my iPhone called iGCT Pro which stands for iPhone Geocache tool. There is a mapping system within this app as seen on the top left hand corner of Pic. 2

It allows you to input co-ordinates into the app, and name them what you want and it saves them for later use. Then if you click on the map(pic. 3) it shows them as pins. Now when I head down a trail or head into the woods I click on the map and it shows me, as a blue flashing dot, and I can see right away if there is some puzzle caches on my path. I just then have to enter them as a waypoint on my GPSr and off I go. After finding the cache I can remove it from the app if I wish.

Speaking of puzzles, I FTF a hard(Difficulty 4) puzzle cache called Misery Loves Company that was put out by a friend of mine, Cameracowgirl AKA Kathryn Dunphy. It was a very hard math puzzle with many questions with Trig and statistical reasoning. (Jenna did quite a few of them for me. lol) I got it all figured out but one number kept eluding me, so I played with different numbers at the cache site until I got the cache in hand. I never did get a success on the geochecker on the cache page. Persistence paid off!!!

Also this past month I received my custom made lanyard from Geo-Knots (Thanks Laurie)
It is a new company that was started by a friend of mine, and she hand makes them using paracord. 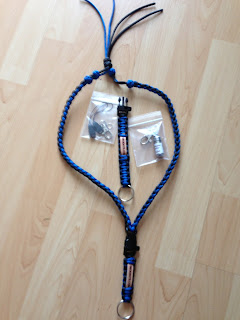 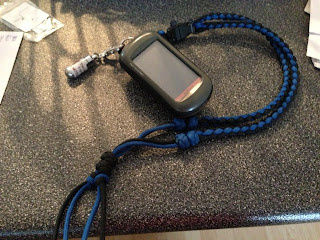 Electric blue and Black Lanyard with accesories
You can purchase a basic one, or have a custom one made up. I had mine made with the colors of my suit that I wear for magic shows. Jenna thinks I have a lanyard obsession, but as you can clearly see from the photo I do not!!! 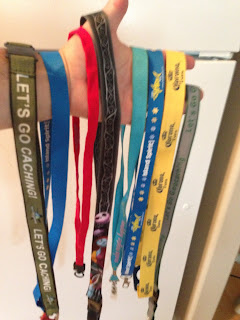 Also this month my good friends over at Landsharkz had a contest called "What's in my Bag?" 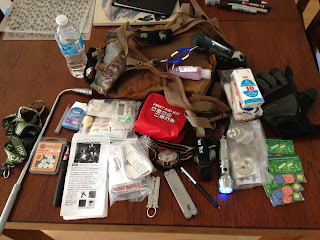 You send in a pic and description of the stuff you carry in your Geo-pack and people vote on them, the one with the most votes wins some cool geo swag from them. I did not win, but still a cool idea. As you can see, I carry everything I may need on the trail. 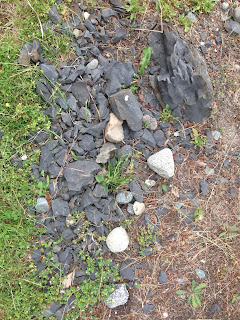 Did a cache the other day on the way home from my show. Can you spot the cache, I did!!! 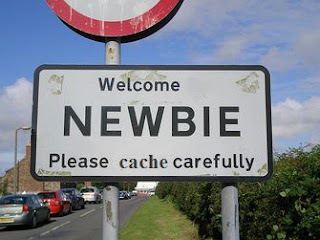