I got a notification for 3 new caches today(March 15) and took off to go grab. When I got to the first one, I realized my app did not download all the info or hints. All I had to go on was the map and the ability to navigate.

Good thing I have great geo senses!! Lol
All the cache pages that I saved had no info whatsoever. Very weird!!

I was still able to find them all and claim the FTF!!! YAY!!!
I left some of my Pathtags and trading cards in them all for others to enjoy!!

YAY, I Just hit a milestone of 5000 finds since I started caching!!!!! I was planning to get it in Las Vegas this coming weekend, but since our trip was postponed, I decided to find a high Favorited cache here to grab. I was sitting at 4998, and called Susan to see if she wanted to go grab a couple of caches with Oliver and I. I looked at my list of most favorite caches in the area, and found 2 very close to each other, like on the same trail, 200 metres away from each other. Lol. 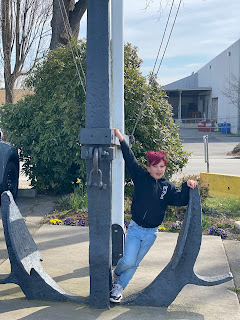 We went to Richmond and grabbed them both. We went to "RichmondC150#06-Sticky Situation which was in plain site, and then headed down the trail to grab my 5000th cache called "Ensconcement Interchange" which was also in plain site but locked so muggles could not access it.  Between the 2 caches, they had over 300 favorite points. 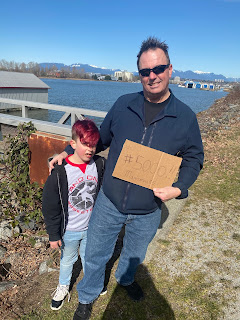 Here is the "Video" of my 4999th and 5000th cache that I got with Sansue and my little boy on March 17th/20
Also within the next couple of months, I will be posting my 100th Blog, and as promised, I will have some sort of contest to win some cool swag!! Keep watching and following my adventures!! This is my 98th blog since I started blogging in 2012 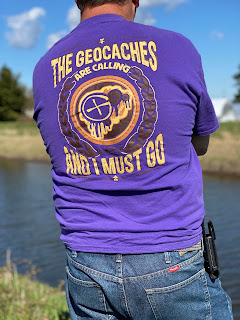 So lately Oliver and I have been hanging out at home because of the ever changing world we are living in right now. This was posted on the British Columbia Geocachers Association (B.C.G.A.) page;
People are still permitted outside if feeling healthy. Take your current Health condition into account.

There are no restrictions on geocaching, however standard and extra precautions can be taken. Wear gloves, wash your hands, bring hand sanitizer, don’t touch your face.
The BC review team is monitoring the situation as well.
BC Government's news roundup from Friday includes this:
"Henry clarifies direction on physical distancing relating to going outside: It is safe to go outside to get fresh air, walk pets, ride a bike and exercise while maintaining safe physical distances."
As you can see by the following pics, I have several solved (The Dark Blue Question Mark turns into a Light Blue puzzle shaped piece) 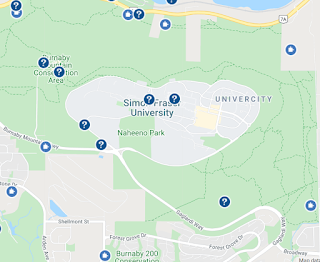 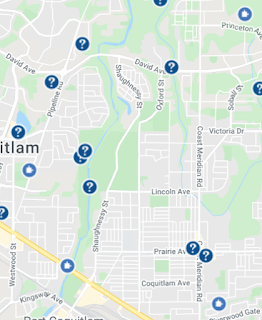 Update on Puzzle caches:
The Geocaching Vlogger introduced the Geochallenge of the Month for April, and it was to solve a puzzle cache online. lol. Well, I have already been doing that for the last several weeks, so the challenge was easy. Here is the video submission that I sent to him. "April Geochallenge"

April 8th, I was just picking up Oliver, when a few new caches got published. We went to 2 of them and, Yup, both FTF's!!!


Important Message:
Geowoodstock XVIII (Fingers crossed) is just around the corner, have you signed up and logged your will attend yet??
Check out the website at "Geowoodstock" for all upcoming info on the event as well as events leading up to it, and make sure you log your "will attend" at "Event" and register online!!
They are going to have some amazing things, including a really cool Magician doing a couple of shows.....Hmmmm, wonder who that could be??? Make sure you get logged in!!!
EDIT NOTE: Geowoodstock has been Postponed until August 27th 2021

So as I have stated above, we have been getting some puzzle caches and while we were out grabbing several today in south Surrey some new caches got published near my place. Obviously not enough time to get back there to get the FTF. We did a cool cache called "Rubik's Cache" where the first stage, there was a Rubik's Cube in the container. It was mixed up and it had Numbers etched into all the faces.

You had to solve the Cube first, to figure out the Co-ordinates for the cache. As you can see by the pics, I was able to solve the cache. I have been doing the Rubik's cube since high school, and I can solve it. My best time is 55 seconds. The world record for solving a 3 by 3 cube is just 4.22 seconds and is held by Feliks Zemdegs.
Here is the Video of me solving the cube at this cache, as well as some other caches we did. 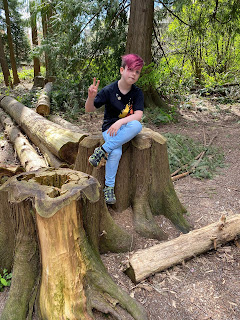 We also found several painted rocks along the trails, got some pictures of them as well.
After solving the cube we headed up the trail to look for the cache. We couldn't find it, so I thought maybe I read the co-ords wrong. We went back to the cube and had to solve it again. lol. After checking some different numbers, we still ended up at the same place. After a quick message to another caching friend, we came up with the find. We were at the right spot the first time, I just did not look good enough. Doh!!!
Right after we made the find and signed the logbook, I got a notification of another new cache. This one was only about 5 km away from where we were. Yay, lets go!!! We headed there, and headed down the trail to a cool little lake in the middle of a residential area and got the FTF!!!!

After signing the newly published cache we headed out for one more puzzle cache that would fill in one more spot on my Difficulty/Terrain grid. All in all, a fun day caching finding a total of 6 caches, including 5 puzzles and one First To Find on a traditional cache.


With this crazy Virus out in the world right now, you need more than some cool swag and a pair of tweezers in your backpack. Keep safe everyone!! 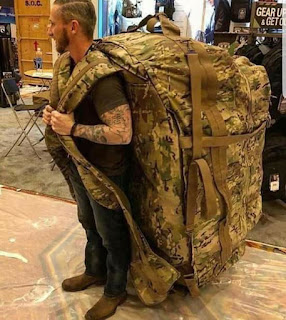