Back to the Island


I had a show in Sooke, over on Vancouver Island on New Years Eve, and a couple days later on January 2nd, I had a show in Nanaimo, so we were able to grab a few caches while over there. Just recently I took my girlfriend out to a couple of caches near my house, as she was interested to know more about it.
She enjoyed it and downloaded the app. I took her with me to Vancouver Island. There was a few caches that I have been meaning to get for some time such as "Magicman65 Tribute Cache" which is a puzzle cache made by my friend Brett Taylor (The GO! Team) where you had to do a magic trick online to get the final co-ordinates. Thanx again Brett for the Tribute, and the awesome cache!!!

Also on the trail to that cache was a challenge cache named T300 Challenge Cache", and to log it you needed to complete enough caches in one month to add up the Terrain ratings to 300. I was pretty sure I met the requirements to log it, as I did, 200 caches in 1 day years back, and all of them were a Terrain of 1.5 or more. 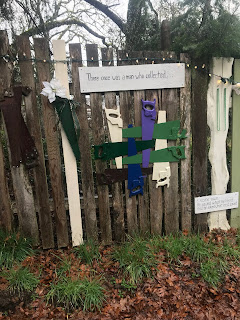 We also did a virtual cache called "Jan's Patchwork Fence"
I used to co-own a cache that was at this location years ago. 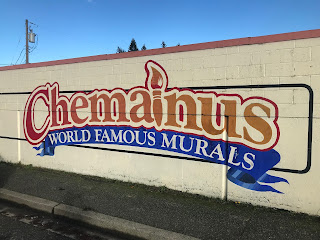 Made a short trip thru Chemainus (I lived there for 7 years) on our way up island on New Years Day. Grabbed a few caches while there, and I showed Sansue some of the cool Murals that has made this town Famous.
I was also able to grab a puzzle cache called "Sudoko Oh No!" while in Nanaoose Bay/Parksville area. I had finished the puzzle back when I lived on the island over 6 years ago, but never got around to finding it. lol
Also found a cool Virtual cache on the way thru Nanaimo, called Petroglyph Provincial Park
In total I found 13 caches consisting of 1 Event, 2 Virtual's, 3 puzzles, and 7 Traditionals

I received my monthly edition of FTF(Geocaching Magazine) and was reading it online when I noticed an ad for FTF playing cards. This month, they had some cool Magic dude advertising the cards. They are great cards, and recommend them to anyone looking for some cool giveaway's or swag. 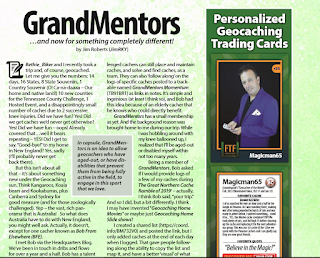 I might have to order more cards, I also have 100 pathtags ordered. Geowoodstock XVIII is coming up in August, here in the Fraser Valley, BC., you can register at "Geowoodstock XVIII". I will be performing 2 shows as well as some close up magic during registration to amuse the long line ups. I will probably pass out some cards and tags. Speaking of giving stuff away, just before Christmas someone on one of the FB geocaching pages posted his collection of geocoins. I asked for his address, and I sent him some pins, tags, and a cool looking geocoin that I had an extra one of, to add to his collection. No reason, just felt like giving!! 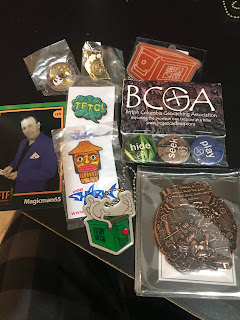 Also I noticed this blog is my 95th blog, and at my 60th I  had a contest and I gave away some cool swag and geocoins. I will do that again at my 100th Blog. Keep watching for it!!!


So I happened to look on the geocaching website, and noticed my stats on the fizzy chart, I only need 5 more to complete it. I haven't really focused on finishing it, I just figured it will fill in eventually. lol
Maybe I need to look for some specific caches to complete it. Road trip anyone?? 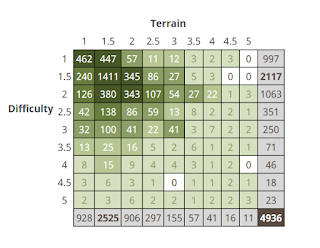 Sansue and I just recently did some caches at Burnaby Lake, but I only found 5 and DNFed 6!! Someone needs to do some maintenance I think. lol

In January 2020, Facebook was littered with upset geocachers. There was a new bully on the internet and they were giving out Travel Bug codes for FREE Discovery on a Face Book group. I know what you're thinking, "How Terrible!". And it was terrible. The community was in an up roar. Groundspeak told cachers just to delete these bogus logs and lock their TB's so they can not be logged thru the FB group. Luckily none of my TB's were listed as I have not seen any bogus logs as of yet. Some people just don't know how to play the game. People have logged caches before also without actually going to the cache. We call those people Armchair cachers. Simple rule is: go find the cache, log the cache!! Same with TB's, find or see the TB and log it!!! Rules don't get much simpler than that. Not sure why someone would want to cheat as they are only cheating themselves.